I had another one of those nights, where you wake up at 5 am and think and think and can’t stop thinking in order to get yourself to sleep. Usually when this happens I pull myself out of bed and try to either solve the issue I was thinking about or in most cases actually create the item I planning/constructing/sewing in my mind. Since my ever growing pregnant belly is too daunting to drag out of bed at 5am, I instead rolled around, thinking, checking the clock until I eventually exhausted myself and fell asleep three hours later for a short enough ‘morning nap’ to find the energy to get up and work on the project that caused my obsessive thinking.

I wanted to create something not totally unlike the pixie bag, but something more casual without the pleats, that would resemble a smallish tote/purse. I also wanted it to look slightly trendy/hip, and thought I’d go with a slight retro/70’s inspired stripping with satin ribbons. Here’s the finished product; 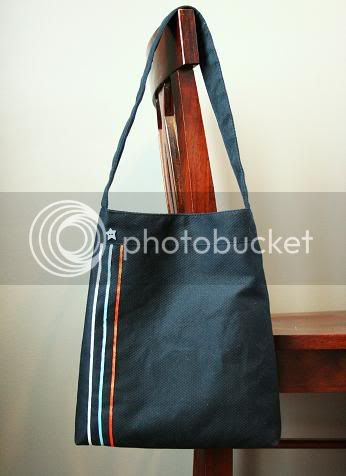 The style reminds me of shorts that I’ve seen my brother wearing in family photos from the 70’s. The vibrant orange and turquoise ribbon seems to bring a nostalgic feeling for me, although I wasn’t born till the 80’s I’ve often looked through those photos and dreamed of what it would have been like to have been born closer in age to my other siblings. I think I'll name it Peter, which is my brothers (the short wearer's) middle name. 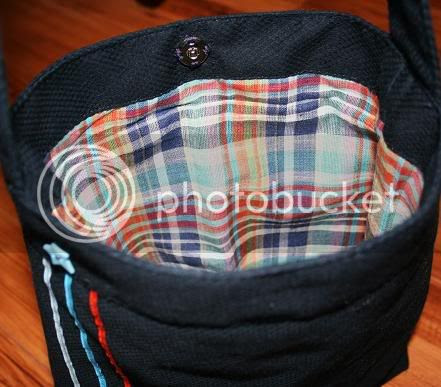 I’m not certain that I recreated the item I was really dreaming about, the sizing almost too closely resembles a tote, while being too slim and short to actually BE a true tote, maybe I should have shortened it a little more. The strap is a little longer then the pixie strap, allowing it to fall a little lower under the arm. I wasn’t looking for this vibe, but it does look like a fun purse for a tween, big enough to carry lots of fun notebooks, markers, maybe a tween magazine.

I guess I’ll finish prepping the listing for the shop and see what the fine shoppers on Etsy think of it.
EDIT: Here he is in the shop, click here for more views/info
Posted by Crystal Card at 3:39 PM 6 comments:

The other day I was sorting through my buttons, as I so lovingly and obsessively compulsively do from time to time, and I came across this really beautiful large retro style lime green button. It was like bliss, or maybe fate, well whatever it was it motivated me and this is what resulted from it; 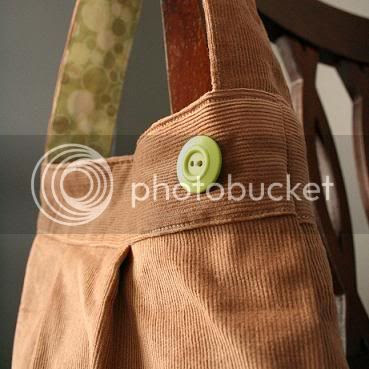 To see more check it out in my shop.

I finally got up the nerve to cut into the outrageously expensive quilting fabric that I allowed myself to indulge in. I like to buy fabrics that are beautiful and durable, but also economically priced (which means I can sell my handbags for a little cheaper then some others to help those who’re seeking beautiful items within their budget). But, last summer I visited this high quality, high priced quilting specialty store, and forked out more money then I really ‘wanted’ to on some really indulgent fabrics. I’m not sure how an individual with a quilting hobby can manage to maintain it financially.

But, that said, after seeing this fabric used in this finished product I’m happy I had it in my stock. I hope someone on Etsy loves it just as much.
Posted by Crystal Card at 4:38 PM 6 comments:

It’s been one of those ‘down’ weeks.

I’ve been overly tired, and under motivated.

We took some time on Friday to join the husband’s family in another town to celebrate his father’s birthday. Since it was a little bit of a drive we spent the night with his parents. It’s nice to get away sometimes, although it was short lived, it was a needed holiday.

I’ve been fretting and fussing about getting a few things for the baby. He’s coming ‘soon-ish’ (if you consider July soon, I guess for an expectant mother the worry and anticipation isn’t uncommon). Hence, I’ve been Internet browsing for baby things. The most important things I’ve been concerned about are the basic necessities of the nursery, and things like the car seat.

I found the most adorable nursery bedding, and I’ve become obsessed with it. Of course it’s much more expensive then what one would typically spend on nursery bedding, but it’s too late, I’ll scrimp and save. Most everything else we’re getting as hand-me-downs, so at least we don’t have to worry about spending money in a lot of areas.

That’s the same wall colour that we had chosen before hand, the hand-me-down crib is white, so it feels like a great fit. I’ll make some fun curtains, maybe in orange and grey, and use the colours of the bedding to make lots of other little treasures for him.

The baby seems to be fine, wiggling lots, kick boxing or something that feels similar. I’m glad he’s got lots of energy, and also hope he gets lots of exercise while he still has some room in there. I can’t imagine him being overly wiggly when we hit month’s 8 and 9.

I’ll be working more for the shop in the days to come.
Posted by Crystal Card at 12:16 AM 2 comments:

Looking for the Children Shine Blog?

How Did You Find My Etsy Shop?

Questions you may have:


Caring for your handbag; Almost all bags are machine washable, if you do machine wash (because of bright use of colors, and some materials used) wash them in cold water, on a gentle cycle. If you would like to be cautious, hand wash in cold water (may be best for most bags). Lay your bag flat to dry. When in doubt (if you have a bag that's a combination of bright vibrant or dark colours and subdued paler tones) spot clean, spot clean, spot clean!!

If you have any other questions, simply ask. I'd also like suggestions or feedback.
Thanks for looking!!!